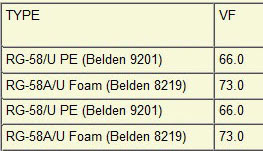 A recent clean-up of the shack revealed several lengths of RG-58U coaxial cable, each with a connector on only one end. I realized that they would make ideal candidates for using my nVNA's ability to determine their velocity factor.

No other info is printed on the cable jacket except "RG-58/U" and a 12 digit number. Looking up "RG-58/U" reveals several possible velocity factors and I could probably Google the long number and get more info, but where's the fun in that? After all, I have a $65 VNA.

The next job was to attach the cable to the nVNA and run a sweep of roughly 10 to 25 MHz.

Why that range? 6.039 meters represents a 1/4 wavelength (in free space) for a frequency of 12.525 MHz; I chose a range encompassing that frequency since the VNA will show pure resistance at that point, ie no reactance, or a phase of 0 degrees.

Once I saw the zero-crossing, I ran a narrower sweep of 15-18 MHz for greater resolution of where the zero R actually occurred (screenshots below).

The sweep revealed a crossing of the zero reactance point occurs at 16.8475 MHz. This will repeat every 1/4 wavelength. Dividing 12.525 MHz by 16.8475 MHz reveals the VF - 74%. VF varies slightly with frequency; this cable is probably its rated VF of .73 at a much higher frequency. 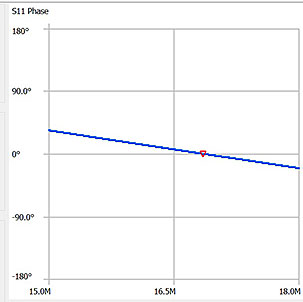