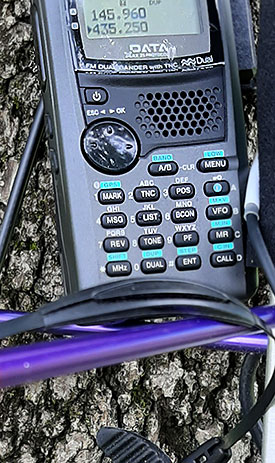 Satellite AO-91 passed overhead at 1810Z today, and there I was, pointing the Arrow antenna at the southern horizon.

I knew this day would come - I just didn't know it would take 19 months and a pandemic to make it happen. Or, more accurately, the boredom to make it happen, that is a chief side-effect of the pandemic.

Despite having lost any familiarity with the radio I might have once had, I was able to set up the parameters that allowed full-duplex operation on the correct frequencies.

And I have to admit it - it was an amazing thing to hear to hear my own voice in the headphones simultaneously as I spoke, knowing that the RF representing it had traveled up to the satellite and back. All with an output of 2 watts.

Prior to the pass, I had spent the better part of an hour being inspired by several videos on Bob KK4DIV's YouTube channel. By the time the Minute of Truth arrived, I was ready to go.

I didn't have a voice recorder to log my contacts and I knew that working the "EasySats" doesn't leave time to write much down, so I set up my RSPduo and used the recording function built into the software that runs it to record my transmit frequency. The recording is time-stamped so it's easy to see when, and hear with whom, a contact takes place.

I didn't expect to start receiving the sat until it was at least 15 degrees up - we are surrounded by tall trees here but it seemed not to matter very much. The first intelligible signals began at a satellite elevation of 8 degrees and were then solid for the remainder of the pass.

The last time I made any contacts with satellites was at least 12 years ago and it was with a Yaesu FT-857D. It had more power but it didn't have full-duplex. Today's contacts sounded almost like phone calls, thanks to that capability.

In an email after the pass, Michael KJ5Z (one of the stations I contacted) told me that weekday passes are now as crowded as weekends, due to the number of people now staying home.
.
.
Posted by John AE5X John AE5X at 3:26:00 PM