Paul K4FB recently reminded me of this posting from the old 1.0 version of my blog. Some time after the posting below, he bought my beautiful blue DSW-20 transceiver I used on this QRP outing. And he specifically remembered the unique construction of my dipole, using materials available! Thanks Paul, for reminding me how much fun QRP was when the bands were in good shape and no FT8 was yet to be heard. From some time in 2000, when I lived in NJ/NY:

A recent trip to Texas to visit my family coincided with the arrival of my DSW-20 kit from Small Wonder Labs . As part of my visit, I also wanted to camp out on land near Henderson, Texas that's been in our family for a century and a half or so, and do a little target shooting, listen to the coyotes and, of course, break in my new QRP rig. And perhaps welcome a visit or two from any old family ghosts that might still be around. With plenty of land and a lot of tall pine trees, I made vague plans for a full-wave loop for 40 meters, fed with twin lead, which I could tune to use on 20 meters. Or maybe a 1/4 wave vertical with 100 or 200 radials up on the hilltop.

But plans sometimes go awry and this was one of those times. Due to a late start getting everything together and packed, I only had time to put up a 40 meter dipole by the time twilight settled in. The dipole was unique, my target shooting skills need work, the coyotes are loud and haunting, and my new DSW works like a charm. 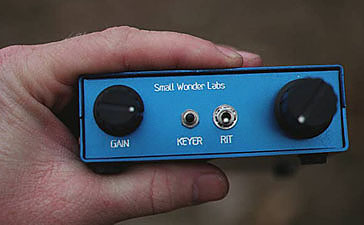 When I opened the package containing my new DSW20, the first thing I noticed was the quality of the case. I can usually judge the quality of a kit by the looks of the circuit board, but in the case (no pun intended!) of the DSW, I couldn't get over the lightweight, yet heavy-duty feel of the housing. It really is good quality construction, with engraved labeling and an electric blue anodized finish, all held together by 8 small Allen screws (wrench included). The assembly manual is clear and concise with no ambiguity and the circuit board is top quality. Construction is divided into six groups and total assembly time was less than 4 1/2 hours. The smoke test was uneventful and tune-up was a snap - one transformer and one cap to tweak and you're done. As I was staying with my aunt and uncle (ie, no antennas) during my time in Texas, "First RF" for this rig would be two nights later from my tent.

Our property is located near the small town of Henderson, Texas - population 11,000. I had all the 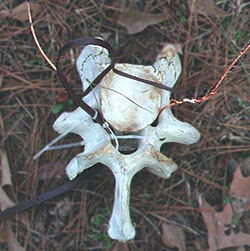 equipment I needed to get on the air with the exception of a center insulator for the dipole. I had planned to stop by Henderson's Radio Shack and pick one up on the way out to the campsite. It was 1:15 pm when I arrived at Radio Shack. Radio Shack in Henderson closes at 1:00 pm on Saturdays. DOH! So I drove on out to camp, knowing I'd figure out or find something to use. As I was gathering firewood, still wondering what to do about a center insulator, I came upon an old, dry, bleached cow skeleton. I'd seen lots of cow skeletons in my childhood but never did I notice before how perfectly constructed the vertebrae are for 40-meter dipoles. I don't know how this obvious relationship between HF antennas and cow bones could have escaped me all those years. I felt silly for being ignorant of this basic tenet for so long. Wondering about the dielectric properties of calcified bovine carcassi, I selected one of the more attractive vertebrae and commenced antenna-building. Feedline was 300-ohm TV twinlead. Ropes on the ends of the dipole legs, tied to half a brick and thrown into the pines and.....voila - a multi-band dipole at about 30 feet. A ZM-2 tuned it for 20m to make the DSW happy. By now night was falling and it was time to get on the air.

Darkness comes early this time of year but at least the temperature was mild. The rain fly was on the tent, more for wind protection that for rain, for the forecast called for a clear, cool evening with a low of 40F. A candle lantern suspended from the tent's ceiling and a Mini-Mag flashlight provided light. I set the DSW on top of the Norcal 40A and remembered how, when I first built the 40A, I thought it was small. But sitting beneath the new DSW, it looked a bit clunky. A battery pack of 10 "C" cells provided power, MK-33 paddles from Whiterook did the keying and Radio Shack Nova 71 headphones provided audio. I wasn't backpacking and my pickup (aka 12VDC supply) was parked right outside the tent, but I wanted to use "C" cells in order to learn more about operating QRP with them. 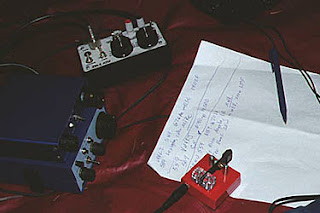 The rig came up on 14.060, confirmed by a push of the tuning button. A push of the "KEYER" button, followed by a string of dits upped my keying speed to around 16-18 wpm. I already like this rig! I tune down to a lower portion of the band where I hear a W4 working an EA3. They are both equally strong to me and when their QSO is over I give the EA3 a call. He comes back to me with a 559. Awesome! An hour and a half later and the logbook contains an SP1 and half a dozen stateside calls. Someone made a comment on QRP-L recently about this being an ideal rig for blind amateurs - everything is "touch & listen". Those same qualities make it perfect for a dark tent. The only time I needed light was to log the QSOs and to write down the callsigns of who I was working. I could remember the rest in my head.

Around 8pm local time, I switched to the Norcal 40A. I really wanted to work some DX on 40 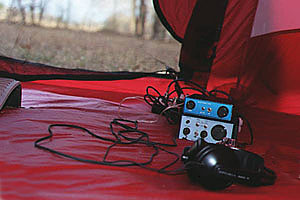 meters, but it was not to happen tonight. One thing I liked was that it was very easy to switch between these two rigs. The power connectors are the same size, as are the other three necessary plugs : antenna, paddles and headphones. Less than a minute to change bands/rigs. With the KC1 installed, the 40A is also an easy-to-use rig in the dark. Even easier as a matter of fact due to the memory function of the KC1. Calling CQ is as simple as pushing a single button. I wish the DSW had a memory keyer. I made several stateside contacts on 40 meters but didn't hear any DX at all and decided to get some shut-eye. Thirty minutes after lights-out, two groups of coyotes started howling at each other and it was to this eery sound that I drifted off to sleep.

I awoke the next morning at 6:30 am. It was still dark and the 40-meter rig was still hooked up so I flipped up the ON switch and put on the phones. VKs, ZLs and JAs! And loud! I called several VKs to no avail and then answered a CQ from a JE1. Tomi gave me a 569 from Tokyo. He was 599+ in my tent. Two California stations and then I go outside to cook breakfast. That's all the QRPing I would do and I was a happy camper. Both rigs worked great, I worked DX on both bands, coyotes serenaded me and I learned some interesting and useful information about cow bones. But no old ghosts came to visit.
.
.
Posted by John AE5X John AE5X at 9:16:00 AM