The magic of sunrise/sunset on lowband propagation 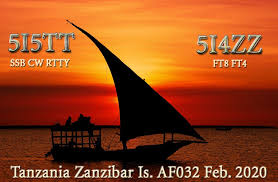 Every DXer knows that an enhancement to propagation paths often occur  when one of the stations is at or near their local SR/SS, especially on 14MHz and lower.

My own experiences with this have mostly been limited to my sunrises as I listen for Pacific area and Asian stations on 40 and 80 meters.

The 5I5TT DXpedition currently on the air from Zanzibar Island off the east coast of Tanzania gave me an opportunity to experience that phenomena at their sunrise and it was an amazing thing to see/hear. The change in the strength of their signal, as received here on my 80m dipole, was short-lived and anything but subtle.

80 meters was the only band I needed Tanzania on and I was very disappointed when 5I5TT first started working NA on that band a few nights ago. Heavy QRN from a passing storm (that's now due to hit the UK this weekend) resulted in static crashes (S9+10)  that wiped out everything on the band, even strong local stations. Between them I could hear 5I5TT very weakly but at a level I would have considered workable.

I resisted calling them since I stood a 75% chance of missing any possible response and gave up on the hope of being able to work them on 80m this time of year.

But a few nights later - last night - the storm had passed and the QRN was gone. 5I5TT was working mostly East Coast US stations on 80m CW and I was able to copy them consistently about an hour before their sunrise. They were in the noise, not strong but probably workable, maybe S4 with noise at S3 or more.

Looking at the real-time sunrise line on DX Atlas, I decided to wait and just listen to the pile-up a while. As I listened to who worked them, I looked up those US stations on qrz.com to see what kind of antenna they were using - a recent habit I've developed when DXing on the lower bands.

In the space of a few minutes, as sunrise began to occur at 5I5TT, their signal strength went from S4 to S9. The noise level remained at S3, making 5I5TT sound like a local station. This lasted for 15 minutes, then they faded just as suddenly, down to the noise level and were barely copiable from then on.