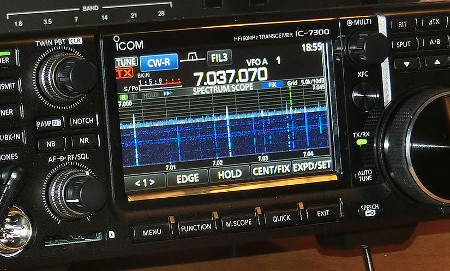 Three weeks with the IC7300 have resulted in a For Sale ad for the radio (it sold within minutes). Despite the almost unanimously high reviews, we each have our own criteria regarding how we want a radio to interact with the user.

I should have known this in advance but ignored my inner doubts. My expectations were unrealistically high and were formed in part due to the rave reviews by almost all users of this radio. No one's fault but my own.

For better or worse, any reviewer's subjective opinion of a radio is relative to whatever radio they're accustomed to using. In the IC-7300, I found certain characteristics to be annoying and, rather than me adapting to the radio, I'd rather have a radio that can be configured to adapt to me. Those characteristics were:


My Flex and Apache Labs rigs have spoiled me - I admit it. Filter widths and the amount of spectrum presented on the display are infinitely variable and adjustable without the need of accessing a menu. This is enormously helpful in contesting and DXing (split), particularly on crowded bands encountered in those events.

For all my complaints about Flex's behavior with Windows updates, I realize now that the 6000-series of their radios were light-years ahead of their time when they were first offered for sale. I know that because they are still ahead of their time even 10 years later.

In my opinion, the IC7300 capitalizes on the "SDR" aspect as a selling point - without offering the true flexibility of what SDR offers. To a significant extent, it is an SDR-architecture rig with the limitations of a superhet. But this is Icom's first design of a technology that a small handful of others have been producing for a while - and it is a good "first".

Further, more minor, nuisances of the radio were: