Finally, all three components came together: the 630m LP filter for my U3s, the 5-watt amp kit from G0MRF and the loading coil for my 80m dipole (configured as a top-loaded vertical on 630m).

The hold-up was the coil, solved by a trip to Home Depot. I had repurposed last year's bucket (coil form) so had to make a new one. Looking at my write-up from back then I saw that I needed 25 turns of 12g wire to bring the antenna's SWR down to less than 2:1 so I made that my starting point for the new coil. To my surprise, 25 turns was exactly what was needed this time as well.

This surprised me because the dipole was down for the summer. When I re-installed it, it went over different tree limbs and the feedline going up to the center feedpoint is now at more of an angle than last year. Although it is not resonant - note the large -j number - the SWR is low so the transmitter/amp are happy.

I started the night's WSPR session barefoot with just the U3s putting 200mW into the antenna. The ERP, with a modeled "efficiency" of the antenna of -13 dB, was 5mW and I was curious to see if anyone could hear me at that level. KB5NJD in Dallas, 200 miles to my north copied me.

It was not yet sunset at that point so I'm looking forward to using just the U3s again in the future.

Just after sunset I turned the output on the U3s down to 4mW and hooked up the amp. This low amount of drive resulted in 5 watts, or 250mW ERP. I do not yet have a proper heat sink for the amp so I'm using a piece of hardware just to add some mass to the amp's final transistor. It works FB with the metal being warm close to the transistor but the outer end not much above ambient. 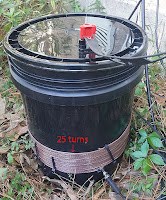 Over the course of the night, many stations decoded the signal with best DX being K9FD in Hawaii.

I'm very pleased with how all the components performed. At $30, the amp is an inexpensive way to add 630m capability to stations whose main rig puts out only a few mW on that band (Elecraft K3, Flex 6000 series, some Kenwoods).

It was a simple build with a one-step alignment procedure requiring nothing more than a multimeter.

An added benefit of the dipole antenna's fed-as-a-vertical configuration is that I can jumper out the coil and use it as a top-loaded vertical on 160m. But the next step is to get the amp installed into an aluminum housing.