I finished installing my G0MRF-designed amplifier kit a few days ago and have been using it each night since. It makes a fine companion to the QRPp output of the U3S. The aluminum housing has been on my shelf for a long time and was a perfect fit for the amp. Apologies for not remembering the make and model number... 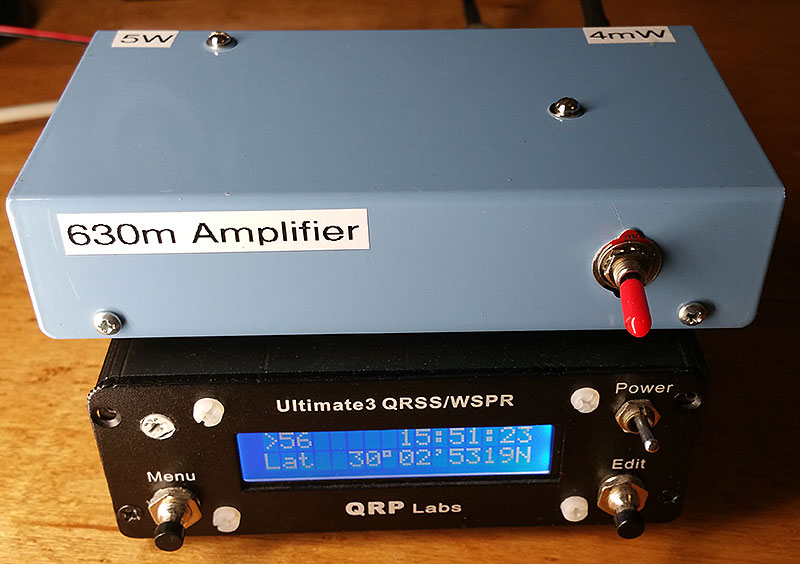 I was initially concerned about heat dissipation of the final transistor during a 2-minute WSPR cycle but those concerns were unfounded. The final transistor is mounted directly to one of the inner sides of the housing and a TO-220 style heatsink was then attached (via 6-32 hardware) to the outer side.

After running several WSPR cycles at 5 watts, the heatsink never got above ambient temperature so I removed it and am now using just the 6-32 hardware (with extra washers for more mass) and the case itself as the heatsink and neither it nor the transistor - I checked it directly - get much above ambient.

The amp works beautifully and seems well protected against accidental mismatch. During high winds, my feedline detached from the bucket/loading coil but a complete transmission cycle caused no damage whatsoever.

The amp also did a fine job accidentally boosting the swept output from my FA-VA5 antenna analyzer as I measured the SWR through it - about 8 watts out from the analyzer!

The amp is broadband, working up to 2 MHz so would work well with the U3S on 160m as well, with changes to LP filter values.

David G0MRF is currently working on a new amplifier kit for 630m to produce a 200-300 watt output from a 5 watt input. I hope to be one of his first customers once the design is complete.
Posted by John AE5X John AE5X at 10:27:00 AM