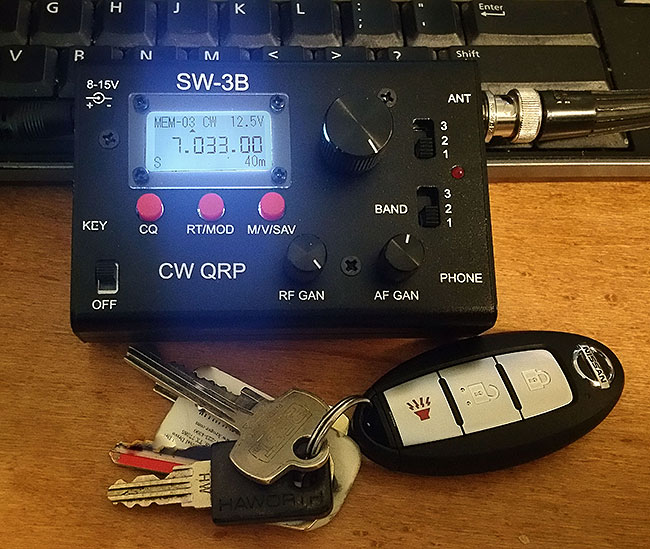 UPDATE: No video possible at the moment. The screen capture software was set to capture screen activity in a file format incompatible with my video editing software. I had hoped to have both screen activity (logging software) and the video of the radio itself represented in the video simultaneously. I may make another attempt at a later date.

In the few months since first posting about it, the write-up on my SW-3B has become one of the most viewed pages on this blog.

More than the usual number of comments and a good amount of emails have shown me that there's quite a bit of interest in this small triband transceiver.

Tonight I hope to come as close as possible to putting you in the driver's seat and demonstrating the radio's characteristics when operating semi-high speed CW. The final hour of the weekly CWT Sprint will be taking place tonight from 0300-0400Z. That's 10pm to 11pm in the US Central time zone.

I'll be delaying an episode of Peaky Blinders for the sake of radio but only if an approaching cold front contains rain with no lightning. Electricity in the sky will delay the video till next Wednesday.

I'll be mostly search-and-pouncing but may get cocky toward the end and try running a frequency. Speeds will be 28-30 wpm so viewers should get a good idea of keying and T/R turnaround times, receiver bandwidth, etc.

N3FJP contest software will be keying the rig; copying will be performed by those appendages on each side of my cranium.

If you feel like joining the fun, please call me - our contact will likely make it to YouTube and then the sky's the limit - Hollywood will no doubt call the next time they need a pair of fine CW ops for their next Titanic movie. If the scene is dark enough, I'm pretty photogenic.
.
.
Posted by John AE5X John AE5X at 4:41:00 PM