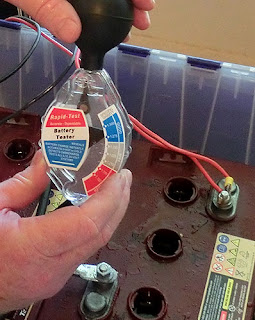 The batteries are two 6V Trojan T105 "golf cart batteries" in series. They are charged by two 100W Renogy solar panels on the roof via an MPPT controller.

The whole set-up has worked great but the one weak link is that there is no easy way to periodically perform an equalize charge on the batteries. According to Trojan I am supposed to do this every 30 days - in 3-1/2 years, I've never done it and didn't know if the process today would take 3 hours or all day.

An equalizing charge puts 16.2V on the batteries for a consistent, uninterrupted amount of time. There are "smart" solar controllers but none are smart enough to know if today's weather will become too cloudy to produce the required voltage for the necessary amount of time.

Equalizing refers to applying a higher-than-normal charging voltage to the batteries in order to cause the electrolyte to bubble and therefore to more thoroughly mix. Over time, the electrolyte tends to settle and the acidic concentration is not uniform from top to bottom. This is particularly true of stationary batteries such as those used in a home station.

Equalizing also removes sulfate crystals that build up on the plates over time. 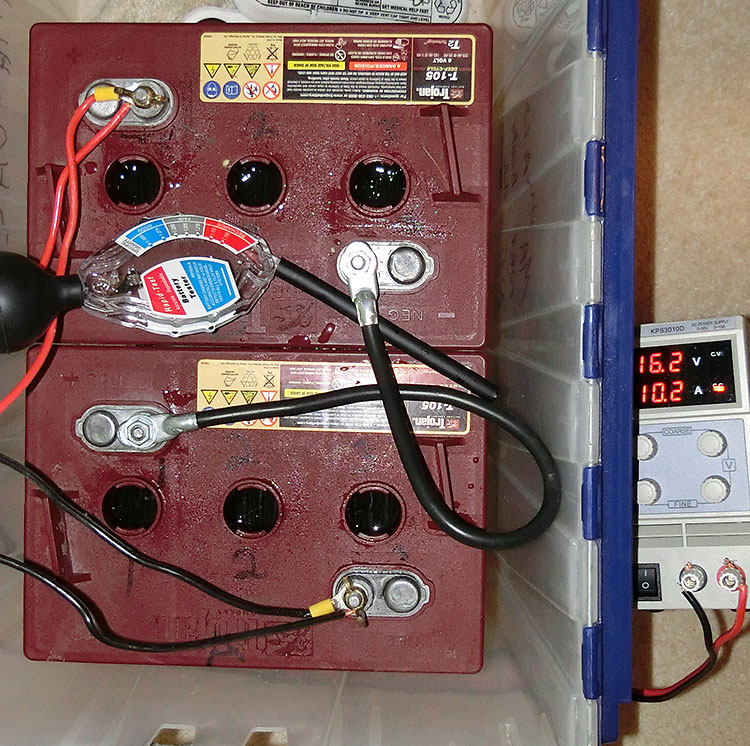 Trojan recommends 16.2 volts on a 12V bank with checks of specific gravity of each cell at 1-hour intervals. The charge is complete when the SG no longer increases.

I adjusted my variable power supply to 16.2V and 10 amps - it took 10 amps to allow the voltage to be adjusted to 16.2V - and began the charge. The electrolyte started bubbling immediately with periodic gurgling sounds.

Not wanting to re-create the Hindenburg tragedy, I made sure the room was well-ventilated as the batteries started bubbling hydrogen.

Interestingly, the cell that bubbled the least was the one with the lowest specific gravity. Of the six cells, 5 were 1.277 (full charge) and one was 1.265. Trojan recommends replacing the battery if any cells differ by more than .030 in specific gravity. I am well within that range at the beginning of the charge.

Here's how it went over the three hours I let the charge run:

I let the charge run for an extra hour beyond when the SG's all became equal in order to (hopefully) remove more sulfation from plates of the poorly-bubbling cell. Although the batteries are now all reading the same SG, I am curious if that will be the case in a week or is that just the initial effect of a newly-completed charge? I'll know in a week.

The hydrometer I used is okay for the job but, if I had a bigger system with more batteries, I'd invest in one of these. As it is, I'm using a much cheaper model whose resolution is not that great but probably sufficient to see at least the relative SG of each cell if not the absolute value. Additionally, bubbles like to cling to the indication needle despite thumping it to dislodge them. You get what you pay for.
.
.
Posted by John AE5X John AE5X at 10:38:00 AM