A QRM generator coming to a crowded FT8 band near you 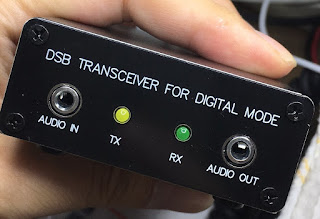 I recently learned from Thomas K4SWL's blog about a double-sideband FT8 transceiver that will soon be offered for sale from Adam Rong BD6CR.

The next time you operate 20 or 40 meter FT8 during prime time for either of those bands, take note of how difficult it is to find a clear spot to place your transmit frequency.

Then imagine that some of the signals you see are there to take up space - they won't be decoded since they are inverted. But they'll occupy spectrum and may prevent decodes, especially for other QRP stations. Or for weak stations.

This unnecessary sideband will not be an attenuated version of the desired sideband - it will be of equal power. Since the power level is "only" one watt, Adam says the interference to others will be minimal. That's a highly debatable statement and depends on other factors.

There are times, especially when trying to copy a weak or distant station whose signal is -25 or so that a domestic 1-watt station would present a significant amount of QRM. And not with a signal that's trying to communicate but rather with one that's nothing more than a by-product. It's just there taking up space and serves no constructive purpose whatsoever.

A DSB transmitter on the phone portion of the band is an experiment - something to tinker with. On the FT8 sub-bands it's nothing less than unnecessary and intentional QRM.
.
.
Posted by John AE5X John AE5X at 6:48:00 AM