Mea culpa - the pirate that wasn't 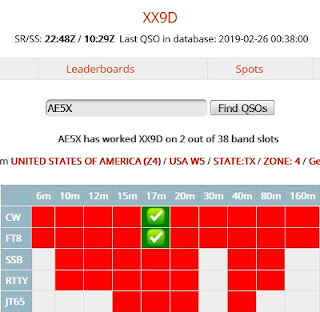 A bit of context for the screenshot below:

By the time XX9D first took to the airwaves two weeks ago, I had prepared my propagation charts and set aside time to work them on the bands that seemed to offer the best opportunity from my QTH.

Macao would be an ATNO for me and I wanted it in the log on any band. Preferably CW.

February 11 arrived and the spots for XX9D began to appear for a variety of bands and modes - and I never heard them at all. On any band or mode.

This went on for days - 12 days to be exact. 12 days of not hearing them anywhere, on any mode, even despite a change in antenna configuration in a desperate measure to at least hear them if not work them.

Finally, on 23 Feb I heard them on 17m CW after I'd given up and was no longer trying. A few calls and they were in the log on my preferred mode.

The next day, also on 17m, I was on FT8. The band was mostly inactive - most of the FT8 activity was on 20m. And there was someone claiming to be XX9D calling CQ over and over again with few takers. And in the normal FT8 mode, not the Fox/Hound mode. Most of those they replied to were other W5-landers - stations I couldn't hear because they were too close. 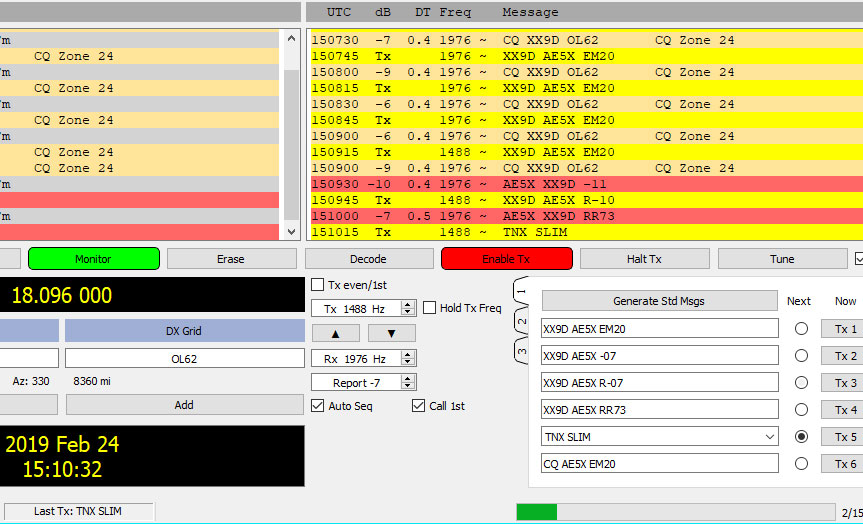 The XX9D claimant was strong - consistently strong, too strong and with no fading, no huge pile-up and CQ's going unanswered. And they weren't operating at their own announced FT8 frequencies for either Normal or F/H mode - I immediately thought PIRATE! Someone's having fun at many a DXer's expense. I thought...

I decided to call the pirate myself and let him know that I knew he was a pirate.

My FT8 contact with XX9D showed up in their next log upload and I hope the op got a chuckle at my TX5 response. :-)