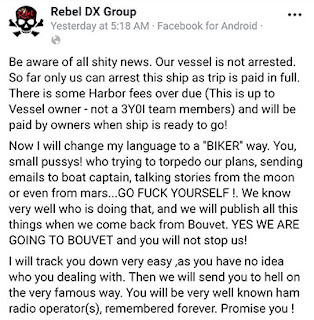 Recent profane postings to Facebook and elsewhere from the team intending to activate Bouvet have caught a good many DXers off-guard.

Gentlemanly conduct is most likely a quaint thing of the past as certain individuals in our hobby now mimic the behavior of politicians, "news" media and, sadly, society in general. We all decline together...

A few days ago, the Rebel DX Group (3Y0I) posted a message to their Facebook page, allegedly in response to efforts by unnamed individuals who are trying to sabotage and undermine the efforts of the 3Y0I team attempting to activate Bouvet.

If true, the posting, made in anger, is understandable to a certain degree - large amounts of money are on the line, not to mention the human element.

Yesterday morning I wrote a few sentences to eHam's DX Forum to that effect, defending Dom 3Z9DX and Team, for a Facebook posting that I thought had been made in a moment of (quite understandable) anger.

I now regret that defense.

Today a new FAQ page was posted (here) and the lack of respect to the DX community is now more direct:


As much as I hate to denigrate our 11m cousins, it almost seems like something more likely to be read on a CB forum.

The Rebel DX Group seems to be going to lengths to sound tough, manly and all that juvenile crap - I'm embarrassed for them. Grow up, guys, and stand up on your hind legs.
.
.
Posted by John AE5X John AE5X at 6:47:00 AM