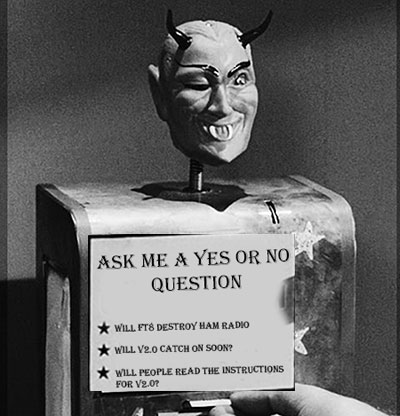 Unfortunately, unlike the Twilight Zone, an episode of "what's wrong with my upgrade?" may last longer than 30 minutes.

Of the changes in WSJT-X rc4 relative to rc3, the one that should be printed in bold is that rc4 is not backward compatible with previous versions. Whereas rc3 gave the option of 75- or 77-bit protocols, rc4 is fixed, write-it-in marble 77-bits of digital communicative pleasure.

This is written in the updated Quick Start Guide, but many people are not reading it, based on comments in various forums and emails.

In full disclosure, I must plead guilty myself (but my guilt was short-lived):

I updated the laptop/Anan-10e digital test platform to tinker prior with the newness-ness prior to applying said upgrade to the Flex/desktop. The waterfall on WSJT-X rc4 showed many signals - yet only 3 or 4 decodes per 15-sec pass.

Did I do something wrong? Should upgrades not be made after a dose (or two) of Baily's Irish Cream?

Then, and only then, did I do that Thing I normally eschew in favor of progress - I read the release notes again.

Rod Serling then informed me that "there is nothing wrong with your set". So I currently have two FT8 set-ups - rc3 on the main rig, rc4 on the QRP side.

If you have WSJT-X rc3 and want to communicate with stations operating rc4, you must enable 77-bit protocol in Settings>Advanced. Better yet, just upgrade to rc4 to be better prepared for the main V2 release coming next month. 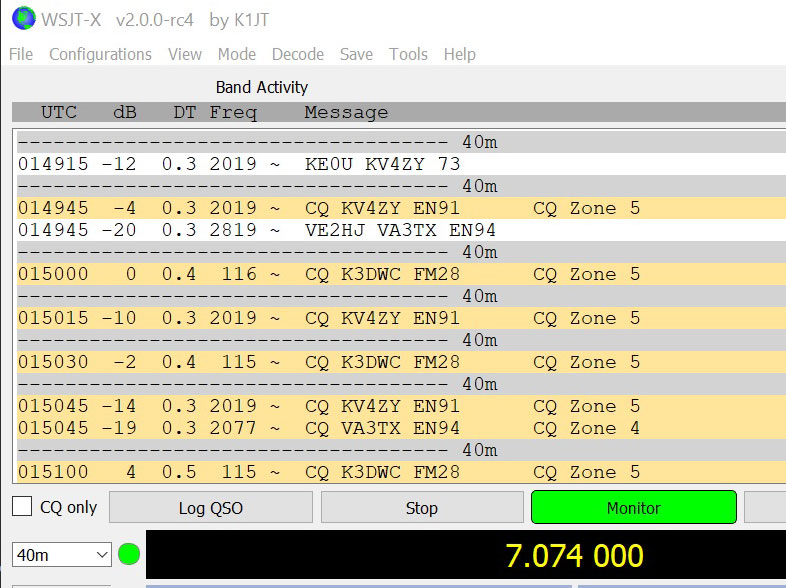