Everything here worked flawlessly last night in the "RTTY Round-Up" psuedo contest using FT8 but there are (minor) changes that need to be made in order to be able to use FT8 in contests. My set-up was a laptop PC running W10, Apache Labs ANAN-10e running PowerSDR mRX 3.4.9 (3 watts out), KPA-500 (producing 45 watts out) and a dipole. And of course WSJT-X -rc4.


I did not run JTAlert for this event, therefore I also did not have my contacts automatically populate ACLog.

Activity level was high on 40 meters; 20m was vacant. Operation was 4 kHz above the main FT8 frequencies. I took turns both answering and calling CQ and my CQ's were often answered by multiple stations, including a few late-night souls in Europe.


Enabling the contest mode of WSJT-X brought up a log window that was automatically populated with stations worked. This window indicated local time rather than UTC. The regular logging function of WSJT-X was still active as well and this logged contacts correctly in UTC time.

The color coding of stations in the received window of WSJT-X did not change according to whether or not they had been worked. Additionally, all CQing stations were the same color, previously worked or not. After 7 or 8 contacts it became difficult to remember if I'd worked a station or not.

That's it for my issues. A few others report system crashes; one VK station reports getting stuck in a loop:

"As a result (with weak signals) you can often end up in what can be termed a “RRR/73” loop…i.e. wsjt-x sends the 73, ceases Tx, and then the station responds with a RRR … creating somewhat of a messy situation to deal with…

The only resolution is to double-click BACK on the station that issued the RRR, in which case you often respond with a R-XX response instead of a 73 … then part of the way through the you nee to resolve the matter with a [TX 5] override instead of a 73… reducing the “confidence” of the signal received at the other end.

You end up in a rather nasty, frustrating loop !

Often you have to disable the “automation” in order just to manually send “73’s” to meet the requirements of completing the QSO."

All in all it was quite easy to quickly make contest-style contacts, even with a laptop with a single monitor. During CW contests with either the Apache or the Flex, two monitors are needed - one for the radio's operating software (for tuning, filter control, etc) and another for the contest logging software (usually N3FJP). 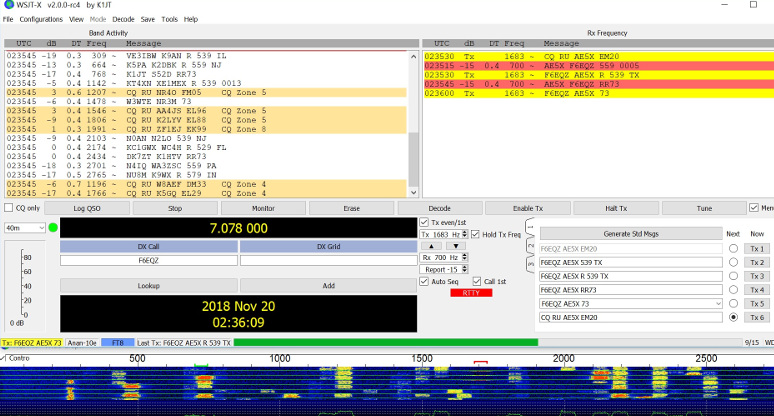 But in FT8, the rig's software runs in the background, ie I don't need to see it since all "tuning" is done via WSJT-X and filter selection, gain and other controls aren't necessary.

The real RTTY Round-up is January 5-6. The next release of WSJT-x is scheduled for December 10 and that i ssupposed to be a finalized version, not an -rc#. Based on comments from others and my own minor issues (shared by others as well) I believe one more -rc version will be needed before proclaiming FT8 as ready for contesting.
.
.
Posted by John AE5X John AE5X at 6:17:00 AM