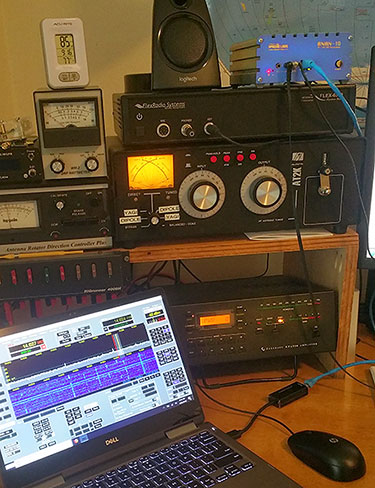 After a week of using the SunSDR2Pro I began to realize that it wasn't the radio for me and I sent it back for a refund.The refund was issued quickly and with no fuss - I thank the vendor for that.

The radio itself seems to be a fine performer and does well pulling weak signals out of the air despite their being adjacent to stronger ones. That was the case during the All Asia DX Contest last weekend and the SunSDR2Pro did quite well on CW.

So why return it?

Just briefly and without going into specifics (since this is not a review) I found it to be overly complicated to go into split mode, configure for digital modes and save profiles reliably. Documentation is lacking - the manual is very brief and seems more like what a summary of a manual would be rather than the manual itself. Plugging in the connector on the back of the radio to enable a PTT signal to my KPA-500 caused the radio to disconnect from the PC and as long as the cable was plugged in, connection of radio to PC was not possible.

I'm sure any of these issues could be solved by posting to the forum or calling the vendor but I'd rather "nuke it out" myself via the manual, online documentation or just applying what I know and making some progress. But after two issues, then a third and then the fourth, I began to realize that this wasn't the radio for me.

A "Wanted to buy" posting to eHam brought me two offers of a radio I had a few years ago - and Apache Labs Anan-10e. I loved that radio and the open-source software that ran it but it gave up the ghost thanks to a nearby lightning strike.

The 10e is no longer available new and that's a shame. It was a kilobuck new and provided many with an inexpensive entry into direct conversion SDR. Losing mine led me to replace it with the Flex but I still missed the little Anan.

My new one arrived two days ago and seems to be in mint condition. Configuring it was simple despite many changes to the software over the years since I last used it. My first test QSO was with on CW with Joe W2KJ who told me they keying and tone sounded nice.

Next, I made a cable to feed the rig's PTT signal to my KPA-500 amp. Max power from the 10e is 17 watts (I'm on solar/battery power here - 20 watts would be more typical for 13.8V) and it drives th eamp to 300 watts. An opening last night on 6 meters allowed the combo to put JA in the log on that new-to-me band. And that was on FT8 - no issues at all configuring the rig/PC for WSJT-X. Quite intuitive - as it should be - with plenty of docs online for those who need it.


My reason for wanting a small SDR rig is to use on outdoor excursions and camping (RV) trips. The requirement for a computer is a non-issue since I always had one for logging anyway when I took the KX2. A small rig with 15-20 watts out that has the ability to see an entire band's activity at once and work digital modes without a spaghetti entanglement of cables is an attractive piece of kit in my book and I can't wait till the weather moderates so I can make an excursion with this fantastic radio.

And speaking of computers, my Dell laptop doesn't have a LAN port. Instead, I'm using a USB 3.0 to LAN converter available on Amazon for a tenner. Works like a charm, nothing needs to be configured, no drivers to install - just plug it in and your PC now has a LAN port and shows as such in Device Manager. Any latency must be minimal because it is invisible to me at 28 wpm CW and in operating FT8.

From the rumor mill: another ham blogger will soon be posting his experiences with a brand new SunSDR2Pro and I plan on being his most intent reader.
.
.
Posted by John AE5X John AE5X at 9:28:00 AM