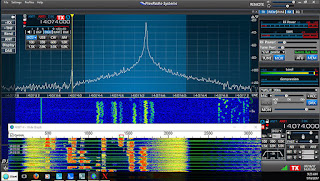 There will be a learning curve for the next version of WSJT-X/FT8 to be released but it will offer a maximum theoretical QSO rate of 600/hr, in part by transmitting five signals simultaneously. Those transmissions will be acknowledgements sent to five calling stations that have been decoded by the DXpedition.

Joe Taylor explains the details and procedures for this upcoming release here in an 8-page pdf file.

To CW/SSB DXers who measure their accomplishments by comparing them to others, this will no doubt raise blood pressure, increase the consumption of alcohol and further exacerbate erectile dysfunction.

For the rest of us, it offers yet another way to marvel at the continuing integration of radio and computer.

The Baker Island DXpedition (KH1/KH7Z) due to air this June will likely be the first DXpedition to make use of the new features offered.

"We have tested the new program features on the air several times, and found them to work well. Another test run will probably be scheduled in a month or so. There will be plenty of advance publicity inviting others to upgrade to a “Release Candidate” called WSJT-X v1.9.0-rc1, and to join in trying to work one or more specific “pseudo-DXpedition” stations at a certain time and frequency. In this way, we hope to continue shaking bugs out of the program and generally to improve its usability — both for the DX operator and those seeking to work him."

Joe also mentions that the DXpedition mode is to be used only by legitimate DXpeditions and those trying to work them.
.
.
Posted by John AE5X John AE5X at 1:50:00 PM