A nice afternoon with no outstanding honey-do's allowed me time to finally install the FT-891 into my truck.

One reason for the procrastination had to do with trying to find a suitable location for the rig. Even with the main bulk of the radio installed under the seat, there is little room in most modern vehicles to install the remote head.

The other was the antenna. I wanted a multiband antenna but didn't want a High Sierra or other "screwdriver" type. That left individual Ham Sticks for the bands of interest - a solution that quickly gets expensive and results in too  much clutter to carry along.

I recently found out about the Wolf River Coil (the Silver Bullet Mini in my case) and it seems to be exactly what I was looking for. It provides 10-40-meter operation with a standard 102" CB whip with taps on the coil providing the proper loading for the band of interest.

Here is an interior photo showing how the tap contacts the coil. Sliding the collar up 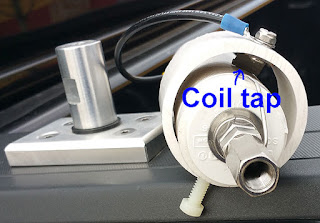 or down the coil allows it to achieve resonance anywhere from 7 to 30 MHz when using a 102" CB whip antenna.

This is effectively a manual version of the screwdriver antennas, therefore it is less expensive and smaller but takes longer to change bands. There is also less to go wrong with it and, since it is designed to make use of a longer whip antenna, efficiency and bandwidth will be better than that achieved with a screwdriver antenna.

Installation of the remote head of the FT-891 was taken care of with a cup holder mount from DX Engineering. 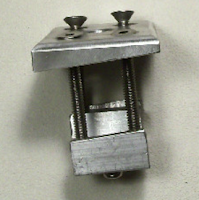 One other item of interest is the Breedlove stake-hole mount with a 4 degree angled top plate (scroll about halfway down the page). This 4 degree skew allows the mounted antenna to be vertical, compensating for the angle of most pick-up bed rails.

Breedlove hardware isn't cheap but it is very well built and heavy duty, and it is delivered quickly.

I'll use the rig mainly for POTA activations and RV camping in areas that won't accomodate a dipole. This will reach out there with a bit more authority than the KX2.
.
.
Posted by John AE5X John AE5X at 2:36:00 PM

John, You never fail to find the neatest gadgets for ham radio. Always helping me to spend my kids inheritance. Thank you for sharing this product on your blog. Hope to see something about it on your youtube channel soon. 73.

That's what my kids tell me! Inheritance - what inheritance?!

I am curious if this antenna requires an antenna tuner. If so, what one are you using and is it also mounted under the seat?

No, a tuner is not necessary - the antenna is tuned by placement of the tap (inside the PVC collar). I'll post more in the future about how much one turn of the coil represents in kHz on each band.