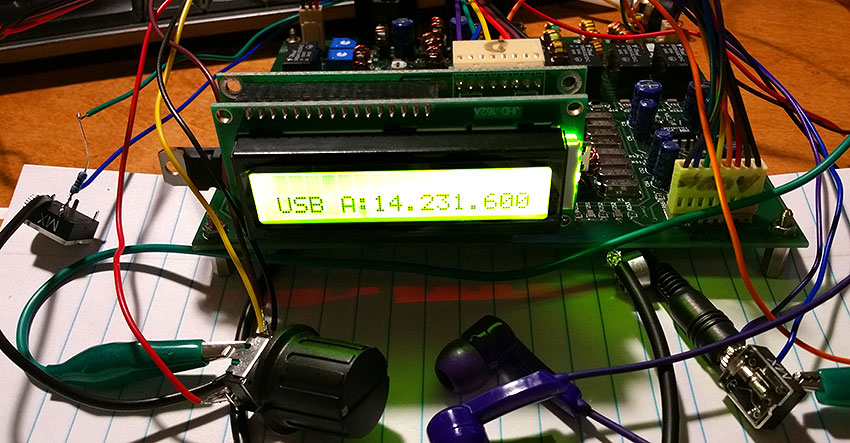 UPDATE: I'm still waiting on my case to show up (evidently on a slow boat) from Thailand. When it does, I'll make the previously mentioned video of the transceiver.

.
Since ordering and beginning the slow-motion assembly of my uBITX - interrupted by Santa and work - I've had a lingering voice in my mind telling me that a 3-30 MHz $110 transceiver can't really make QSO's or even receive well.

For a while I wondered if it were even case-worthy given that even the cheapest plastic cases run $20 plus the labor involved in cutting and drilling. I'd rather not go through all that and then have the rig turn out to be a poor performer. I've been down that road before.

Inspired by Tim's (KA9EAK) success with a close relative of the uBITX, I hooked everything up "spaghetti-style" and fired this little riglet up. It comes up on 7150 kHz LSB and there were signals a'plenty at 10am my local time. Crystal clear and great audio! The tuning is stable, drift-free as far as I can tell and the 50 Hz steps during slow tuning seems just fine for tuning both SSB and CW.

Twisting the encoder knob faster speeds up the tuning with larger steps. I QSY'ed up to 20 meters, stopping along the way to listen to WWV at exactly 10 MHz before I even did the simple 2-step alignment. The WM-2 wattmeter shows about 9.2 watts on 20m with a good whistle, haven't checked it on other bands yet (edit: 9.8 watts on 40m). On 20m phone I heard N4V calling CQ and gave him a call. "AE5X, you're 59 in Maryland" came the reply.

I am looking forward to receiving the case in the mail that I recently ordered for this rig now that I've confirmed (at least to my own satisfaction) that is well deserving of the time and effort of a proper housing.
.
.
Posted by John AE5X John AE5X at 11:31:00 AM