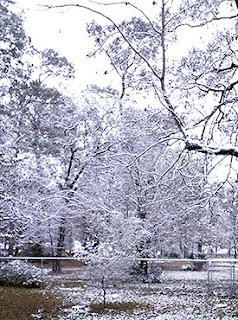 We woke up to a rarity this time of year in this part of the state - snow. Just a dusting but it adds a seasonal accent to the area we don't normally get. Add coffee and the last remaining parts of a QRP kit and you have the ingredients for a fine morning.

About an hour's worth of still-in-my slippers soldering and the kit was finished. The alignment went well and all the parts were smoke-free.

The snow on my Yagi (okay, no more mention of our snow) did nothing to hinder its SWR and, while my initial CQ with the new rig didn't yield a QSO, I did receive several reports on the Reverse Beacon Network. This was a bit of a surprise as I was using the built-in microswitch hand key.

The Morse decode function of the QCX had no problem decoding my outbound CQ or in displaying the text of other stations I tuned to although a bit of lag is noticeable when tuned to stations that are sending at 25+ wpm or so.

Power output with a 9V battery was 2.5 watts.

This kit also has the ability to operate as a WSPR transmitter with GPS control of timing, frequency calibration and grid square determination. I have not yet used it on that mode but will soon.

Just had my first QSO with the QCX and it was an interesting one. My 14.060 MHz CQ was answered by Ron WA7GIL who was set up at a roadside rest area in Congress Arizona for a day of portable hamming with his brother. Ron was using an FT-817 on 20m and his brother (using a KX2 on 40m) has a 30m QCX under construction at home.

Ron is familiar with the QCX and told me that mine had a "nice clean note". Thanks for the FB chat and the photos Ron and 73!