Want to be in demand on the air?

As more and more US stations become active on 630  meters, operating events more typical of the higher bands are beginning to manifest themselves. So far there are no official contests or even psuedo-contests but there are those chasing WAS.

Most stations active on the new-to-the-US band are either rx-only or tx-only but a few are actively making WAS-valid QSOs, mostly on CW and JT9.

That's it. Look at all the vacancies.

I am currently a transmit-only WSPR station on 630 meters (but that will be changing in about 2 weeks). In one week of being on the band my 'States That Copied Me on WSPR' numbers 34: 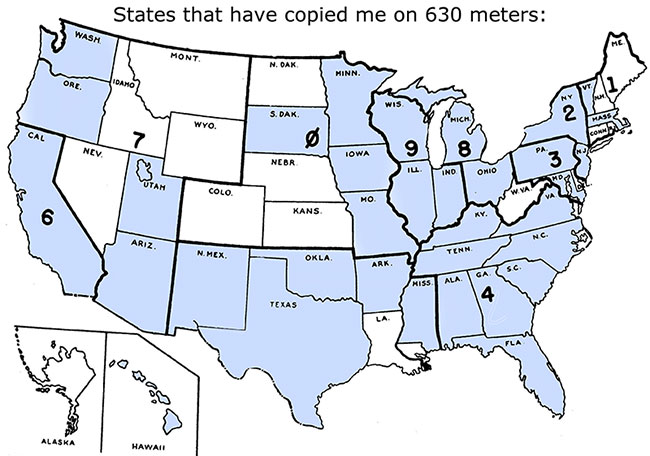 The wrap-up on comparing the RigExpert to the FunkAmateur antenna analyzer got sidelined today with construction of projects dedicated to the band. I'll shortcut the results for you though:

I did find time to modify my coil-around-the-bucket-monstrosity that gets me on 630 meters. Specifically, I added taps to the coil to more easily change where the antenna attaches for better (and variable matching). The FA-VA4 has become my analyzer of choice due to its accuracy, size and simplicity.
.
.
Posted by John AE5X John AE5X at 3:25:00 PM