Hoping the best for the ARA San Juan 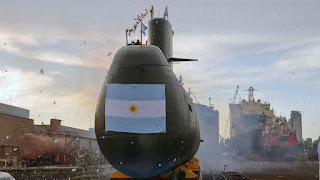 Navies from at least 6 different countries are now involved in the search for the missing Argentine submarine and with each passing hour, the search will become more of a recovery operation and less of a rescue attempt. While my condolences are with the crewmembers and their families, I and another ex-submariner friend are finding it hard not to speculate on what might have gone wrong.

Submarines, regardless of which countries build them, are marvels of technology that incorporate numerous back-up systems and redundancies. Despite this, the most vulnerable part of a submarine - the one most likely to cause a catastrophe if it fails - is the Main Induction Valve on the snorkel. This is true of both nuclear subs and diesel-electrics like the ARA San Juan. Diesel-electrics have to snorkel more often than nuke subs in order to charge their batteries (nuke subs snorkel periodically in order to quickly refresh the onboard air and to perform periodic maintenance on their emergency diesel engine).

During snorkeling, the sub is at some depth just a bit shallower than periscope depth since the hollow snorkel mast is shorter than the periscope. It is bothersome to snorkel in rough weather because waves wash over the snorkel, causing sensors on it to vent the air pressure that holds the Main Induction valve open so that seawater doesn't enter the engine room. With the release of air pressure, the valve snaps shut like a bear trap, blocking sea water from entering.

Regardless of the sea state, those sensors are periodically (I seem to recall every 5-10 minutes) tested while snorkeling by the Chief of the Watch. He hits a switch on the Ballast Control Panel that simulates sea water on the sensors. This closes the Main Induction valve and causes everyone's ears onboard to pop due to the vacuum caused by the fact that the diesel is still exhausting air (and lots of it) but failing to pull air in. The air supply for the diesel, for a few seconds, is the ambient air in the "people tank". The sensation is similar to flying in an airplane but a bit more pronounced.

If the sensors fail to close the valve, they are immediately closed manually and the snorkeling operation is terminated.

There are three things that make snorkeling potentially dangerous for diesel subs: