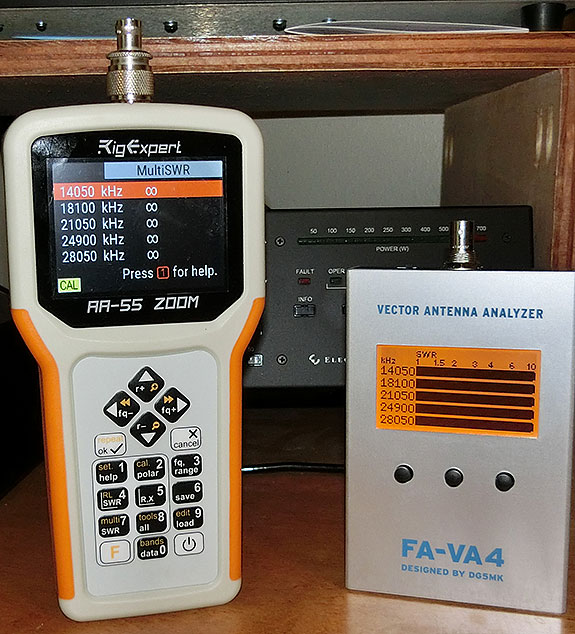 For the past two weeks I've had access to two very useful antenna analyzers with both models being fairly new on the market: the AA55 Zoom from RigExpert and the FA-VA4, an easy to build kit from FunkAmateur.

My use of each of these analyzers coincides with US amateurs being given new slivers of frequencies on 630 and 2200 meters and it is primarily on 630 meters that I've made use of these analyzers to build a 630m vertical Marconi T antenna from the horizontal section and vertical feedline of my 80m dipole.

The analyzers have made that task much easier than would have been possible without them and they both seem to perform the necessary tasks equally well and with readings that agree with each other quite closely.

Differences between the analyzers are the price, method of accessing functions and the RigExpert's "SWR2Air" and Smith chart function.  At the time of this posting, the AA55 Zoom cost $390 and the FA-VA4 is $140 shipping included. Also, the FA-VA4 is a kit that is easily assembled in 30 or 40 minutes and is suitable even for a first time builder.

The AA55 Zoom's functions are accessed by an 18-button keypad, some of which have dual functions. The FA-VA4 has only 3 buttons that are used to scroll through various functions/digits and enter frequencies, etc. This sounds like a tedious method of using such a capable device but, in practice, I did not find that to be the case.

The "SWR2Air" function of the AA55 Zoom is a way of allowing remote adjustments of an antenna while the analyzer remains in the shack attached to the feedline. To do this, it transmits a series of tones on a 2m frequency that correspond to an increasing or decreasing SWR as adjustments are made to the antenna as you listen to the tones on a 2m HT. A neat feature but I never had a need for it.

The AA55 Zoom also includes functions that calculate a feedline's velocity factor, impedance and length as long as other variables are known but these characteristics can also be calculated from data provided by the FA-VA4. The AA55 Zoom also includes a Smith chart display for those who know how to make use of such (I don't!). Also, the AA55 Zoom has the ability to interface with a PC so that data and graphs may be saved and viewed in a larger format.

Before going further, here are a few snapshots comparing the two analyzers in various scenarios. In all photos, the RigExpert is displayed on the left and the FunkAmateur on the right:

For any antenna work I can imagine doing, either of these analyzers would fit the bill. My main desire in an analyzer is to see SWR and reactance values. The former tells me if my antenna is adjusted, the latter tells me if I need to add capacitance or inductance to an antenna as it's being built.

Being able to look at 5 bands (any 5 bands) simultaneously is a neat feature. Each band and each frequency within a band is customizable on both analyzers.

After a week with this pair, I find that for me, the lower price of the FA-VA4 makes it my choice of which to own, particularly when accuracy is not sacrificed for the lower price. The additional functions of the AA55 Zoom are functions I don't need.
.
.