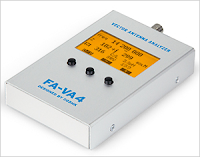 Important note: See my comment (in Comments section) below.

For some time now I've been wanting to replace my ancient MFJ-259 with something lighter, smaller and more capable.

Enter the FA-VA4 Vector Analyzer kit from FunkAmateur in Germany.

Box73 accidentally sent my kit to Don AE4DD in Atlanta. Don emailed me to let me know he was forwarding the kit on to me and provided me with a UPS tracking number. We exchanged a few emails and Don refuses to let me reimburse him for his cost and time. He is a fairly new ham and told me that he has received much help in the hobby and that he is happy to "pay it forward."

Don, you're a true Gentleman - thank you.

Described as a partial kit, the FA-VA4 can be assembled in about 45 minutes and results in a piece of test equipment that weighs in at 10 ounces. More importantly, the FA-VA4 operates down to 100 kHz (and up to 100 MHz) making it ideal for the new 630/2200-meter bands. The MFJ's lower limit was 1.8 MHz.

The FA-VA4 comes with three terminations (Open, Short, 50-ohm) for running a calibration routine - the AA-54 does not.

Here are a few other comparisons of antenna analyzer features I had been considering:

My overall impression of the kit is - Wow. From the packaging, the color manual, the quality of the silkscreened aluminum and, of course, the features, everything about the FA-VA4 makes me happy to have chosen it over the other analyzers I'd been considering.

I have not yet calibrated my FA-VA4 but the measured values of my triband Yagi and 6m loop closely match what two other SWR meters indicate and a 50-ohm dummy load shows a perfect match for the 5 bands I currently have programmed into the analyzer. I've reconfigured the FA-VA4 to have the backlight on at all times and to update faster than the default "Medium" setting. Other parameters are configurable as well, including which five frequencies can be swept for simultaneous display.

I'll use the analyzer over the next few days and become more aware of its various settings, make some other measurements and perhaps make a YouTube video of it in action. I'm very happy with it and think it well worth the $140. 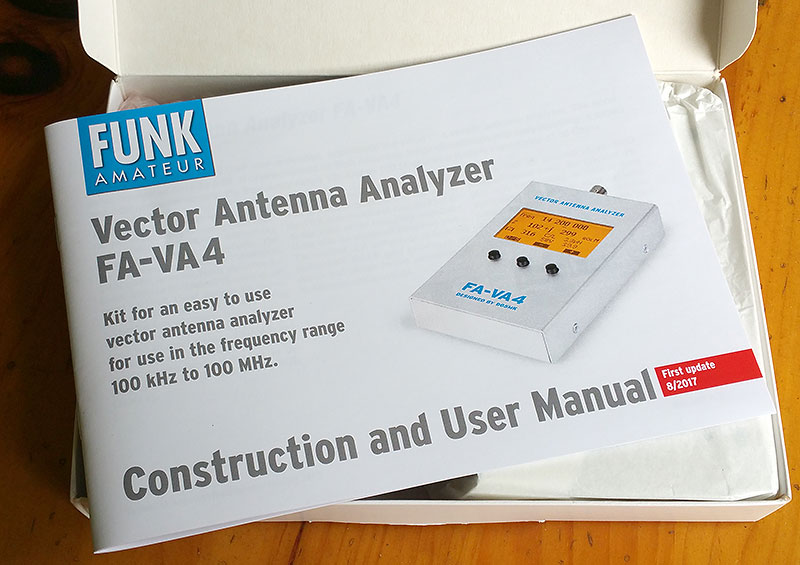 Good morning John, great review I too hav the MFJ unit now and for a good long time. The times I have used it the unit it worked great and sure did save me huge time when tunining my attic fan dipole. After reading your post and the eham reviews I placed my order this morning for one. Let's hope it gets to the correct address!
73
Mike

FB Mike. I think all hams have an MFJ analyzer at some point - they must have sold a million of them over the years. They are good products but the fact that they require 10 batteries adds much to their weight...and they go through those batteries like a hog takes to corn.

When you begin to assemble yours, make sure to solder the LCD to the LED panel *on top* of the board. I initially soldered one pin wrong and had to remove it with solder wick.

Great review John. This looks like a winner. I own an AA-54 and it is great, but much larger than the FUNK analyzer. For portable ops at this price, the FUNK would be great. Look forward to seeing how you like it as you take it outside and use it operating portable. Thanks for the nice review.

Hi George - I didn't mention it in the posting but I had an AA-54 for 4 days when I found out about the analyzer described here. After comparing the price and reading the specs of each, I ordered the FA-VA4 and returned the AA-54 to Amazon...but I did use the AA-54 to measure my antennas that are up at the moment (tribander, 6m loop) plus a 6m Yagi on sawhorses. The functionality of both analyzers is almost identical except that the AA-54 has software that allows saving readings more conveniently.

I hope to activate a POTA soon (probably this Monday) now that the wx is cooling down a bit and will use the FA-VA4 to look at whatever antenna I use.

Do not use lithium batteries in your FA-VA4 - their voltage is too high and causes the analyzer to repeatedly reboot. I finally found this to be the cause after checking for cold solder joints, reflowing the solder and checking every other possibility. Then it dawned on me - maybe the lithium batteries produce too high a voltage. I replaced them with regular alkaline AA batteries and all is well.

This problem was intermittent and would only occur when I first turned on the analyzer. After the first 30 seconds or so, it would not happen again. I believe this gave time for the battery voltage to drop below the threshold that was causing the uprocessor to reboot. New lithium AA batteries produce 1.65 volts; alkalines produce 1.6 volts and this appears to make all the difference in the world as far as the analyzer's processor goes.

Use alkaline AA cells, not lithiums!

Hay Mike, if I buy one would you put it together for me. JB

Unable to download manual. Is there a user group?

Happy New Year to all !!!
Health and good luck!
I have been working with the analyzer for 2 years - small, convenient, accurate ....
A small drawback - the backlight of the display goes out quickly !!
And only good alkaline batteries, and you will be happy!
73! Rusko - LZ1RT