First transmissions on 630 meters at AE5X


After initial erroneous indications with my antenna analyzer (more about that in a future post including an A/B comparison with a RigExpert AA-55 Zoom) I was able to trial and error my way to resonance on 475 kHz. 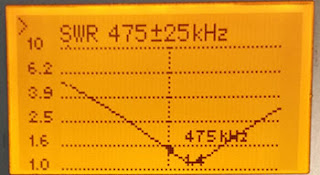 Prior to that I laid out a very poor ground system of one radial running 15 feet to my cold water faucet and another radial 100 feet long and then connected to a 30-foot chain link fence. As I said, a poor radial system. With resonance on 475 kHz I had a 2:1 bandwidth of 22 kHz indicating (correctly) an "almost non-existent ground" that would make it "difficult to induce any current into the antenna" according to someone who knows far more about antenna theory than me.

I had low expectations of performance and waited to throw the 'On' switch until two other Texas stations appeared on the WSPR map indicating their status as receiving stations. I had mentally resigned myself that just maybe one of those nearby stations might be able to decode my sub-watt transmissions.

Within minutes of the first 2-minute WSPR transmission, 9 stations appeared on the WSPR database indicating reception - one of those was ZF1EJ; others were on the east coast. By the next morning 55 unique stations had decoded my signal. These included all 10 US call districts and, my best DX, K9FD/KH6 on the island of Molokai.

To say that I was amazed is an understatement. Less than a watt ERP, a poor ground system and a frequency below the AM broadcast band...despite all that, I was decoded numerous times and with surprisingly decent S/N ratios in many cases.

Long story short: If you're tempted to try the 630-meter band but are put off by the fact that you live on a city lot, don't let that stop you.

Besides the feed system, the antenna is 90 feet of ladder line (conductors shorted together just inside the bucket's lid) going almost completely vertically up to an 80m dipole strung between two tall oak trees at the 90-foot level. The transmitter was a G0UPL Ultimate 3S with 250 mW out driving a WA3ETD converter/amp to 20 watts. Modeled antenna (in)efficiency was -13 dB gain, thus the 1 watt ERP. 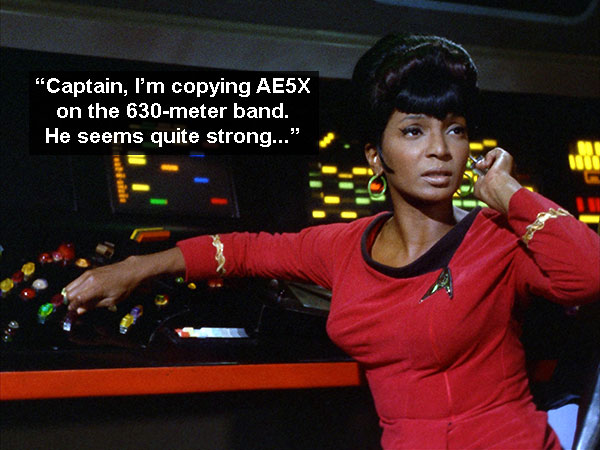 TU! Looking forward to more about the antenna analyzer measurements and how you resolved them and got to resonance! 73, Jim H W5EST

Great stuff John! Very neat. I also look forward to your coverage of the AA-55.

Hi George - I feel like a new ham again on this new-old band. Our storms have moved out and I'll be on again tonight but perhaps just trying out the antenna on receive.

Good morning Jim, I'll probably be posting that info this weekend along with a RigExpert AA-55 vs. FunkAmateur FA-VA4 comparison.

Well done John! Thanks for doing some of the pioneering work on this new band. I'm behind you but headed in this direction. Your work will be a great reference when I'm ready to jump in. Much appreciated!

Good post. Amazing what one can do with some wire. Thanks for sharing!

Hi Tim - I look forward to hearing of your results on the band. Try not to take to long to get there :-)