The following story was mentioned briefly by one of my instructors at Submarine School in Groton CT back in 1984. Thanks to the internet (and one good book), many more details are now easily available - here is a very condensed version of of a tragic story in US submarine history.

There are many stories in the history of Sam Morse's code regarding disasters, rescues and failed rescues. To the best of my knowledge, there are five documented instances where Morse was used by crewmembers of stricken submarines to communicate with their would-be rescuers.

But the definition of what constitutes Morse Code varies with the integrity (or sense of drama) of the journalist reporting it. The phrase "Morse Code" has been used when it would have been more accurate to say "they banged like hell on the hull."

But on 17 December 1927 the Morse Code was used, perhaps more extensively than on any similar occasion since. And by occasion, I mean submarine disaster.

On that date, the well-travelled submarine S-4 was conducting sea trials off the coast of S-4 was called back to the East Coast for an overhaul.
Massachusetts. The submarine was eight years old at the time and had set the US distance record for submarines by sailing from Groton CT to the Philippines via the Panama Canal (which had opened 5 years prior). After serving there for several years,

It was after this overhaul that the sea trials were being conducted. These consist of steep ascents, steep descents, snap rolls and deep dives to check for leaks. After surfacing from a dive, S-4 collided with a Coast Guard destroyer (USCGC Paulding), ripping a 2-foot gash in the forward part of the submarine and sending it to the bottom 110 feet below.

Ice cold seawater would have flooded the batteries almost immediately as they are located at the lowest point of any submarine. The resulting toxic chlorine gas then began to occupy any space not already flooded with water. The surviving men onboard retreated behind watertight hatches to the aft part of the sub which by now would have been in total darkness.

At this point, it was about 4pm - 34 of the 40-man crew had made it aft to the engine room with the remaining six unaccounted for who had been in the torpedo room. The flooding of the forward compartments had ceased and the sub would have been eerily quiet.

At 11am the next morning a rescue ship was on the scene and divers were making preparations to attach an air line to the submarine. Diver Thomas Eadie tapped on the hull along the length of the sub. He received 6 taps in return from the torpedo room and none as he worked his way aft - the 34 men in the engine room had not survived.

Roughly 24 hours after S-4 sank, another submarine (S-8) arrived and used its Fessenden oscillator to ping questions to the survivors on S-4 in Morse Code:

"Is there any [chlorine] gas down there?"
"No, but the air is very bad. How long will you be?" came the reply, tapped in Morse on the hull.
"How many are you?"
"Six. Please hurry."

That evening a diver took a high pressure air hose down to S-4 with the idea being to blow the water out of the ballast tanks causing the sub to surface. But the weather had deteriorated and the seas were rough. The diver's own air line became fouled. He was in turn rescued by another diver and barely survived.

"Hurry. Is there any hope?"
"There is hope. Everything possible is being done" came the reply.

"Lt. Fitch: your wife and mother constantly praying for you".
"R" was the reply. Message received.

The captain of the rescue ship (Frank Brumby) then ordered the ship to return to Boston to wait out the storm which lasted several days. It returned to the scene on the 21st of December and a diver was able to attach an airline to the sub. No answers were received in response to taps on the hull and an extracted sample of air from the submarine taken via the airline showed CO2 levels at 7% - too high to support life.

In March 1928, three months after the sinking, S-4 was brought to the surface. Investigators found that "the walls were battered and scarred by many heavy blows". In the compartment containing the last six survivors, personnel found Lt. Fitch "lying under a workbench. On the hull above him were two black spots where the "interior white paint had been chipped away from repeated blows with a wrench". The wrench was found nearby with "two of its sides flattened from prolonged use".

S-4 was reconditioned, recommissioned and renamed SS-109 and became a test platform for submarine rescue experiments. On 15 May 1936 S-4 was scuttled in deep water off Pearl Harbor.
. 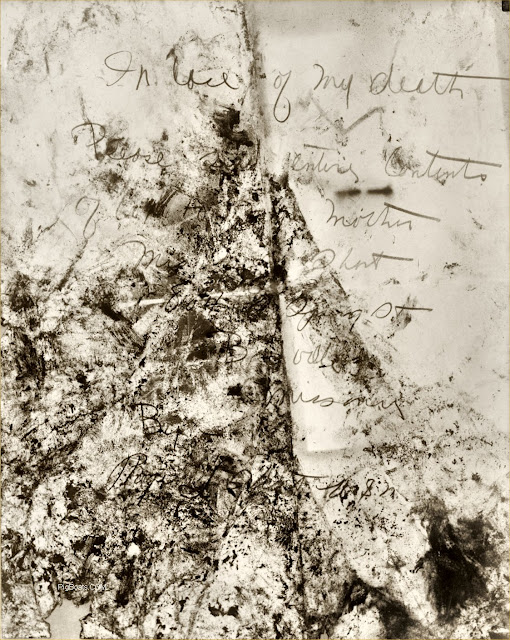 Written by Torpedoman Roger Short and found on his body: "In case of my death Please send entire contents of box to my mother Mrs Short 804 Spring St. Boonville, Missouri."
.
.
Posted by John AE5X John AE5X at 4:44:00 PM