NPOTA RC01 is back on


I recently cancelled an upcoming NPOTA activation for Amistad National Recreation Area (RC01) in Del Rio, Texas but I'm happy to report that I'll be able to activate it after all. 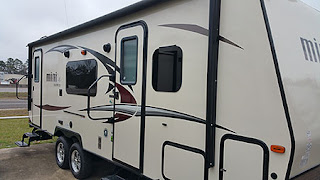 My XYL and I have been shopping for a travel trailer and finally took the plunge a few days ago with delivery of the RV scheduled for yesterday - the day I was to leave for Del Rio. All went smoothly and any imagined issues that might have lingered into the weekend were nonexistent.

So I'll be leaving for Del Rio bright and early (real early) on the morning of 11 December - that's tomorrow as I write this - with a target time of being on the air at 1800Z on Sunday, probably after having eaten a big breakfast of huevos rancheros, frijoles and tortillas. I'll stay until nightfall, then begin again the next morning (Monday) until 1800Z.

I won't be activating any of the San Antonio missions on the way home as originally planned.

NPOTA RC01 currently has only 1066 contacts making it somewhat rare at this final month of the program. I'll operate both phone and CW at frequencies on or near those posted in the banner above.

Good to have worked you, Scott.