The KX2 has made a worthy start in this year's CQWW but I keep thinking about the final month of the National Parks on the Air event and all the activity yesterday before the contest started.

It seems like a good number of stations are making a final push to provide as many NPOTAs as possible to those chasing them.

After uploading to LoTW last night, I had my 101st NPOTA confirmation and at least 20 of those were worked just yesterday.

To tell the truth, my heart's not in this year's CQWW and I turned the radio off this morning to put the final touches on my truck-mounted vertical that I plan to use for a few activations of my own. There will be other CQWWs but, after 5 weeks, no more NPOTA.

The main part of the antenna consists of DX Engineering's 65-foot telescoping aluminum mast. I'm only using 35 feet of it to allow operation on 7 MHz and up. It sits in a 2" PVC drain on top of three layers of old inner tube.

The PVC itself is bolted to a piece of pine scrap I had laying around. RG58 attaches to the bottom of the mast along with a nearby bolt for the coax shield and radials.

The antenna is held upright with four ratcheting cargo straps that are secured to each corner of my truck bed. On-sight I will also attach guys at a higher level but, with no wind, the whole contraption is surprisingly secure as is. 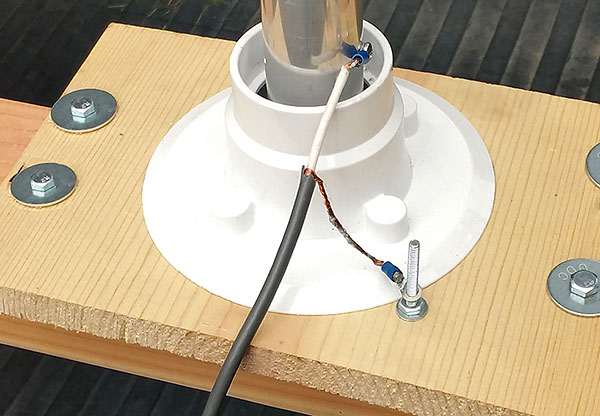 The mast collapses down to six feet and is put into the PVC base and guyed with the straps in the collapsed state. I then raise it one section (6 feet) at a time until it is all the way up (for 40m). Higher bands require fewer sections to be extended but even going all the way up is an easy one-man job that only takes a few minutes. The aluminum sections don't bind at all even though I have not treated them with silicon or any other lubricant.

care to share how many sections for 20 meters? How is the SWR?

SWR on 30 and 40m is 1.4:1. Haven't checked other bands yet but I expect them to be similar since I can adjust the antenna's length to whatever it needs to be.

Let's get a nut and washer to hold down that ground terminal.

They are present and accounted for, just missing from the photo.

how did your activation go? tried to contact you but my propagation suck from the PNW

Maybe I'll catch you on a future activation.

You did well. Thanks for the update. I need to review my set up. I must be in a trap hole. Good luck.